I’m being a blog slacker this week.  I apologize; things have been crazy.

I spend yesterday with Megan.  We did some craft supply shopping, and I’m pretty excited to start my project.  It should be an easy one.  Should be.  Hopefully it actually is.

I convinced Daniel to take me to see The Dark Knight Rises last night.  It only took three days of pleading and making him watch Batman Begins and The Dark Knight over and over again for him to cave.  I, personally, thought the movie was amazing.  I was on the edge of my seat the whole time.  I laughed, I cried, I wanted to scream in frustration.  I didn’t, though.  People would’ve looked at me weird.

Daniel, on the other hand, didn’t particularly enjoy it.  He said, “He pauses before he hits someone. Every time, he’ll hit one person, pause, then hit the next one. If he was really a fighter of the level they say he is, it would be one fluid motion. He wouldn’t need to stop. Other than that, the movie was really awesome, but since fighting was 3/4ths of the movie, I was annoyed.”

So, yeah.  There’s that.  I told him he was being f%*#%^g ridiculous and ignored him the rest of the night.

Well, until I forced him to read The Bloggess.  I don’t remember ever seeing him laugh that hard.  He was reading the post about Beyonce the Giant Metal Chicken, and said, “This is exactly why I would never let you walk around with that much money.  You’d come home with a giant chicken.  I don’t think you realize how much like her you are.”  I don’t know if I should take that as an insult or a compliment.

This post is a bit pointless at the moment.  I did want to talk about something, though.  You guys will probably think I’m nuts after this, but whatever.  I can handle it.

As a child, I had recurring nightmares about aliens.  Seriously.  I was (am still am) rediculously scared of the idea of aliens.  I think it’s because my mom let me watch Discovery Channel shows about UFOs and such before I was ready.  I remember watching one where this guy had radiation burns in the shape of a chain link fence.  He claimed it was from a UFO.  I don’t know why that one sticks with me more than the others.

Add to that my predisposition for sleep paralysis, and I think my fear becomes very understandable.  Well, maybe not.  I might just be a bit crazy.  Think whatever you like.

Now that I’m done with the background, I’ll stop rambling and get to the point.

I mentioned the other day that I watched the sunset down in Cape May Courthouse with Daniel and some friends, right?  Yes, I did; here’s the post.

What I didn’t mention was that we saw a UFO.  I’m not saying that it was alien.  I’m just saying that there was something in the sky that we couldn’t identify.  It was weird.  Really freaking weird.

It looks like a flaming disk, I guess.  I don’t know how to explain it.  It rose straight up from the ground, then shot off to the side really fast.  At first I thought it was a Chinese Lantern or something, but I really have no idea.

I tried googling it (on my phone when I couldn’t sleep the other night) and couldn’t find anything relating to that evening.  I did read about a UFO siting last July where the eye witnesses explained seeing pretty much exactly what we had witnessed.  Of course, I can’t find that site again, and that makes me grrr in the face.

My camera doesn’t have digital zoom, and I don’t have an awesome stalker lens yet.  This is the best photo I could get of it.

My friend’s camera has amazing zoom capabilities.  Here’s the two he managed to snap. 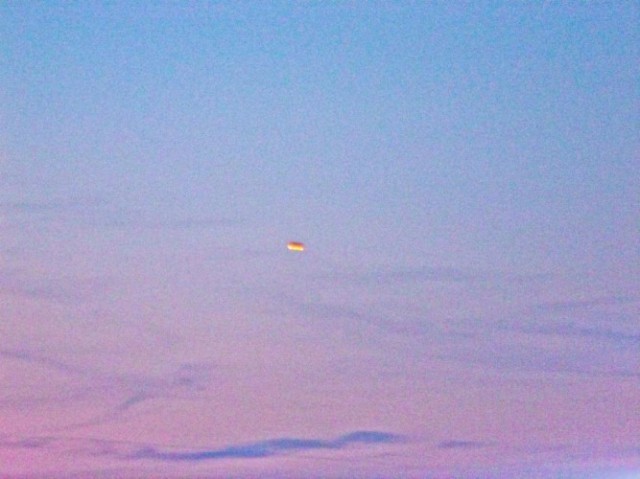 Also, please notice the amazing color of the sky. I love dusk.

This was zoomed in as far as his camera would allow, so it’s really pixelated.

Please tell me WTF this is.  After we saw it, there were two helicopters that circled the area for a while.  I joked that it was the Men in Black, and we were about to get our memories wiped.  That obviously didn’t happen, though.

Really, guys, I’m not crazy.  I’m sure there’s a logical explanation for this… but until I know what that explanation is, I’m going to be freaked out.

Anyways… question of the day:  Have you ever had any UFO sightings (or, paranormal experiences in general)?

"I have learned to keep to myself how exceptional I am." ~Mason Cooley I'm a married stay at home mom living in Southern New Jersey. I have one daughter, one son, and three furbabies. I love to cook. I love to craft. I love to sew. I just.... love to create in general. I also am pretty fond of adventuring, of exploring new places. I'm shy when I first meet people, but once I'm comfortable with them, you can't shut me up. I'm crazy and silly. I have an unhealthy obsession with dinosaurs.
View all posts by pamasaurus →
This entry was posted in adventure time, crafty, friends, movies, photos, rambling, the bay, weird and tagged adventuring, alien, craft, crazy, dark knight rises, friendships, movie reviews, paranormal, rambling, sewing, the bloggess, ufo. Bookmark the permalink.

9 Responses to I’m Really Not Crazy